Compatibility of Work and FamilyHide

For staff, fixed-term (senior) research associates, and fixed-term (junior) professors in a civil service position, the following possibilities for the care of children and relatives in need of care are available:
​

You can find the legal basis here.

The Maternity Protection Act applies to all women in an employment contract. Neither citizenship nor family status matter. Special provisions apply for female civil servants, which are set down in civil service law. However, female public sector employees do come under the Maternity Protection Act. The Act does not apply to students who are completing compulsory internships. The Act also does not apply to adoptive mothers. To enable enterprises to comply with Maternity Protection provisions, women are required to inform the enterprise of their pregnancy and the expected date of confinement as soon as these facts are known.

Expectant mothers may not be employed if, according to medical certificate, the life or health of the mother or of the child would be endangered by a continuation of the employment. Expectant mothers may not be employed in the last six weeks before delivery (unless they have expressly declared themselves willing to perform their work duties), nor until eight weeks have elapsed after delivery, and twelve weeks elapsing in the case of pre-term or multiple births.

From the beginning of pregnancy until the elapsing of four months after delivery, termination of the employment contract by the enterprise is inadmissible apart from a few exceptions. This means that during this period, the employer may not dismiss the employee, even if the dismissal is effective from a later date. The pregnancy must be confirmed on receipt of the dismissal. If the mother takes parenting leave after the birth of the child, protection of employment extends beyond the period of the Maternity Protection (four months after delivery) to the end of parenting leave.

Protection of mother and child at the workplace

The employer must employ a pregnant employee or nursing mother, during pregnancy and after delivery, in such a way, and arrange her workplace, including machines, tools and equipment in such a manner, that she is sufficiently protected from dangers to life and health. The enterprise must provide pregnant employees or nursing mothers the possibility to lie down in a suitable space and rest during breaks, and during working hours if health reasons dictate.

A nursing mother, after resuming employment, may claim nursing breaks during working hours. The time spent nursing is set down by the Maternity Protection Act, specifically twice daily for half an hour or once daily for an hour. For a continuous working day of more than eight hours, two nursing periods of at least 45 minutes should be granted  at the request of the woman, or, if there is no possibility to nurse in the vicinity of the workplace, one nursing period of at least 90 minutes. A working day is considered continuous when it is not interrupted by a rest break of at least two hours. No loss of earnings may result from the nursing period.  Neither may the nursing mother work off the nursing period beforehand or afterwards, nor may it be booked as a prescribed rest break.

Further information can be obtained at the Equal Opportunities Office or in the pages of the Federal Ministry for Family Affairs, Senior Citizens, Women and Youth.

Parenting leave does not have to be “applied for”. The employer is simply given notice of it being taken. Of course, within the applicable timeframe. A curtailment or extension (within the first two years), however, requires the consent of the employer, and must therefore be applied for.

The form for giving notice of parenting leave can be found here.

Backup Childcare for employees' children can be booked monday to friday from 8am to 8pm by the hour. The fee of 25,- Euro per hour must be paid by the employees. It can also be paid from the budget of the employees' unit if corresponding funds (for example "Gleichstellungsmittel" or funds for conference support) are available. During the day, backup childcare can only be used if regular childcare breaks down or in the case of work-related matters in the evenings.

To get current information on summer-holiday childcare, please write an email to familiengerechte.hochschule@uni-bayreuth.de 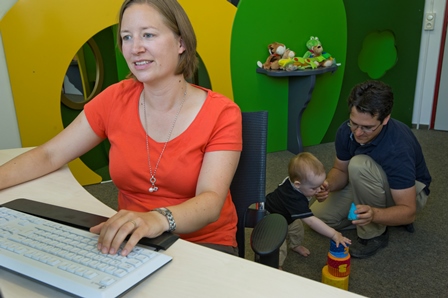